Do you have a real passion for paintball? 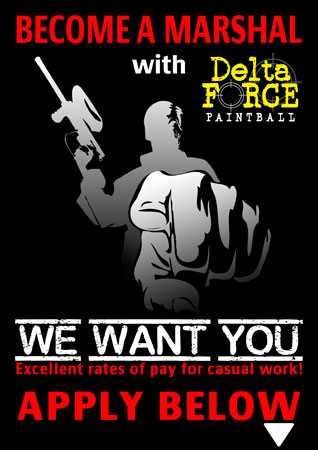 Do you have an outgoing personality, enjoy working with people, in the outdoors and possess superb interpersonal skills? If so, we want you to join our team of motivated people. Apply for a job with Delta Force and you’ll be looking at a fun-filled and exciting work experience that you’ll remember for the rest of your life!

Work History: a Scotsman who has worked for Delta Force in the UK and now in Canada.

“I started work with Delta Force Paintball in Birmingham in England about 7 years ago at only 17 yrs of age. When my father moved our family to the south London area only 6 months later I was wrapped that Delta Force found a marshaling position for me in that region. I didn’t expect that from them seeing as I hadn’t been with them for long.

I’ve found the work environment to be simply awesome. Helping people understand and play the game of paintball never gets tired. I get paid to run around the coolest battlefields and referee the games and give the novices advice and help when they need it. Before, after and on days without games we get to learn all kinds of maintenance tasks which, as a young guy (and I’m sure for the girls too) is so handy in other areas of my life.

In 2013 my fiancee was given an amazing promotion in Canada and again I had to ask Delta Force Paintball to find me a position over there which I thought would be a long shot for certain. 4 months later I joined my fiancee in our new home in Vancouvre and started work with my third Delta Force Paintball centre. Amazing support from Delta Force, I can’t thank them or recommend them enough.”